I'm sure by now you've all heard about hashtag RampGate.  I'll nutshell this thing; Trump got trumped by a ramp.

How did Twitter respond?  With a lot of these videos:

Hope you're a bit steadier on your feet now 😂😂😂 #RampGate pic.twitter.com/1EX3JYIQQ7

There's something so bro-ey about this, no?  Is broey a word?  Let's make it a word.    It's broey.  First of all, you know who else couldn't do the shit President Obama and VP Biden are doing in those clips?  FDR.  Yeah, sorry, he couldn't.

Trump has a lot of issues, he's an admitted sex assaulter, he's a racist, he's cruel, he's pig-ignorant.  I mean, I could go on.

I don't know what his mobility and coordination issues are, I really don't.  He obviously has some.  And you can make the case that if he has a medical condition the American people have a right to know about it.  I think the infamous Walter Reed   event does point to this possibility.   It's possible he did have a stroke, or some other brain event.  I'm going to leave out the too-easy joke about needing a brain to have a brain event.

I can definitely sign on with that.  If Trump had an undisclosed medical event while in office the American people must be told about it and by a medical professional.

But that's not what this is, this broey stuff.  The broey stuff is about machismo.  It's bragging about masculinity.  I've seen more pictures of a shirtless President Obama on Twitter in the past 24 hours than I did the entire time he was President.

This is how we keep women out of the Presidency.  I  could write for days about the injustice of ableism, which is what is on display here.   You don't have to be able to walk down a ramp in order to be a good President.  You don't even need to be able to walk.  But I think a lot of people will write about this.  I want to talk about the less obvious vibes here.  I want to talk about the bros.

Don't kid yourself that there are no douchebros on the left. 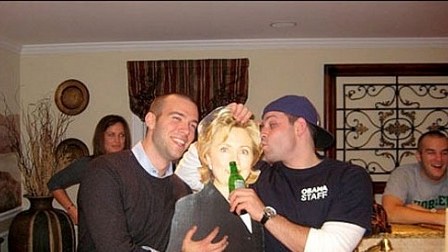 That's Pod Save America douchebros Jon Favreau and Jon Lovett groping a cardboard cutout of Hillary Clinton and feeding her a beer.  These douches are still very active in Democratic politics and they have a voice.

And it's not a feminist voice.

This is the bro-ification of politics.  Remember how these douchebros made their bones; by beating a woman in the 2008 primary.

Remember that Hillary Clinton was not going to jog down hallways, or play golf.  Neither is Kamala Harris.  Why do I bring Kamala up?

No that's actually Jon Favreau and the amazing Jon Lovett who posted this (for which he's never apologized) pic.twitter.com/O0qHX95OGC

A few months after Lovett posted his disgustingly craven broadside against Kamala, everyone and anyone wanted Trump banned from Twitter, and in fact, Jack Dorsey took a stand.  He began a highly controversial practice of flagging some of Trump's tweets as glorifying violence or spreading false information about the election.

And BRO Jon was all for it.  When called out on his hypocracy, BRO Jon had this to say:

To this day, this is my alert system for bad Trump tweets. Immediately, I’m notified here. But a bad tweet proves twitter should enforce its rules, not that this was a good way to win a presidential debate last October. I appreciate the heads up and I hope you can move on.

So, Kamala was right, but BRO didn't trust her motives.  Gee, I wonder what it is about Kamala that makes her so sneaky, so manipulative, to BRO? 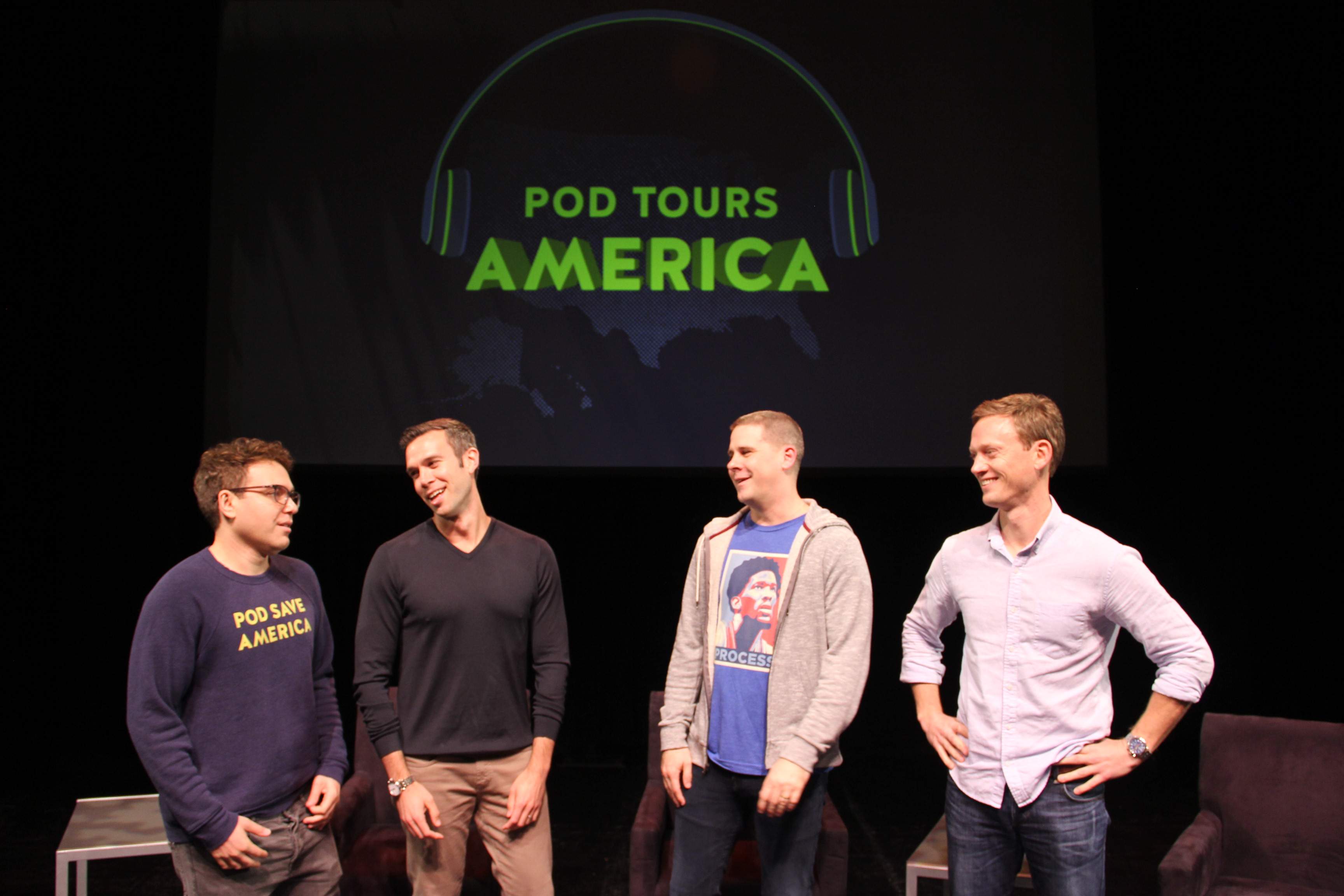 There's one of them wearing a tshirt with a picture of a black man on it, okay?  Happy?  I'm sorry I can't tell you which POD cohost that is, they all look alike to me.   But as you can see, he's clearly showing Pod Saves America's commitment to diversity by wearing this tshirt.  That's representation!

But I digress.  Here is Dan Pfeiffer, another POD Bro, sharing his learned opinions on who would make a good VP choice for Joe Biden:

"Pfeiffer said, "If you were to say to me, 'Who is the most obvious choice to help you win the election,' then I would probably say Kamala Harris. If you ask me, like, 'Who gives you the most upside, the greatest potential to be a game-changer,' I would say Stacey Abrams. If you ask me 'Who would be the best person to step in as president on Day One,' it would be Elizabeth Warren."

Mastromonaco agreed: "Yes, that is correct.""

Notice anything missing?  Evidence?  Resumes? Anything to back up this opinion at all?  Nope.  It's just stated.  It's fact.  Why is it fact?  Well because this Bro stated it 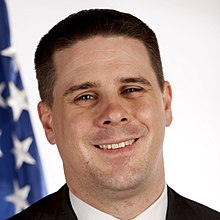 And this lady swore to it: 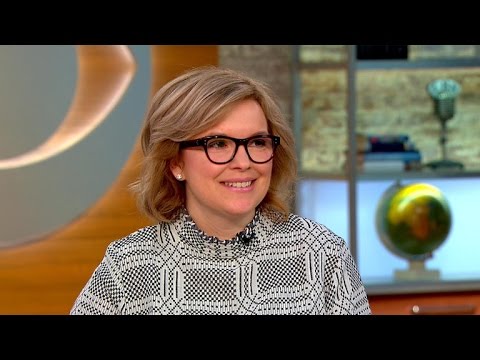 They don't need no stinkin evidence!  And, guess what else?  These two are about to launch yet another white podcast:

"She and Dan Pfeiffer are both known to listeners of "Pod Save America," and are ready to debut a new podcast about the vice-presidential pick called "That's the Ticket.""

So the Pod Firm of White, Whiter, and Whitey are inserting themselves as experts into the VP pick, and they are so committed to whiting this thing up, they are actually launching a white podcast to influence the choice.

But don't worry, one of them will almost definitely wear a tshirt with a picture of a black person on it during the publicity launch!

They render Kamala Harris as the Affirmative Action pick, or as the idiot, Laurence Tribe termed a Kamala pick, "cosmetics".

Dude, that's fucking racist.  In no way is Kamala unqualified, and in my view, in no way is Warren MORE qualified.  But Laurence too, was not asked for receipts by the Washington Post.  I see a big future for him at Pod Firm, White, Whiter, and Whitey.

Listen, this broey shit can be funny.  I know you laughed when broeys all posted that video of Obama and Biden jogging.  But it's offensive to the disabled community, and it makes no sense.  Again, Trump's problems are not his mobility.  FDR could NOT jog.   Being physically disabled in no way precludes anyone from becoming President.  And it's not what makes Trump the worse President of our lifetimes.  Or the cruelest.

But what this broey stuff can do is help keep women out of the Presidency.  Remember, that's how they made their bones.  By keeping a woman from the nomination in 2008.  Now, I'm not stating that Hillary was the better choice in 08, and I thought Obama was a fine President.   I am simply stating facts.

They made their bones keeping a woman from the Presidency in 2008.  They then groped a cardboard cutout of that woman.

Sure, they like Liz.  Well, listen, Biden stated outright his VP will be a woman, so they have to choose one right?

But not the black woman.  Now's the time to look up misogynoir and really keep your eyes on these douchebros.   And ask yourself what expertise or experience Liz Warren has that makes her so obviously more ready to step into the Presidency than Kamala Harris.

Because you won't find it.  It's not there.