The media likes to make a big ole mystery out of suburban white women.  Pondering what they want, deciding they want economic security and physical safety.

Suburban white women, especially married suburban white women, are fucking racists. And they fuck racists.  Their husbands are racist.  All of their previous boyfriends have been racists.  But they have to pretend they're not racist because they're ladies, so they couch their racism with euphemisms like "worried about rising crime rates."  Nobody ever checks if the crime rates really are rising.  They just nod.

A lot of white suburban women are cop groupies.  Badge blowers as I sometimes call them.  Maybe a lot of white urban women and white rural women are too.  Maybe some non-white women, who knows.  I write what I know.   And I know suburban white women.   I live on LI, where you can't swing a Coach bag without hitting another Coach bag.  You don't get more suburban white woman than Long Island.

I have long had a rule that I don't fuck cops.  I don't know, it's like I was born this way?   Or, maybe it was nurture not nature.  After all, my aunt was married to a homicide detective, who once fucked a movie star on the hood of his car right in the streets.  True story.  Oh, also, he was an alcoholic.  A lot of cops are.  Alcohol and substance abuse rates are high among cops.   He even once held a gun to her head.

Of course, your typical white suburban 20 something will hear that, and go all Captain-Save-A-Hoe.

"It must be because of all of the awful things he's seen", she'll wail.  "The love of a good woman can save him!  I can save him!"

Anyway, I grew up around badge blowers.  In NY, it's a thing where the lucky serious girlfriend or fiance is gifted a gold replica of her man's badge!  To wear around her neck.  As in, Property Of.  And oh boy do they get excited when they get that necklace.

I did once fuck a cop, but it was accidentally.  It was during my 20's when to be honest, I was not exactly good at getting background details of my "zipless fucks".  (see, Jong, Erica, Fear of Flying).

I didn't find out he was a cop until afterwards.  That was not a good moment.  It almost scared me straight out of my zipless penchant, but not really. It did make me more careful.

White women play a big role in upholding white supremacy and part of that is their damsel kink.  Wanting to be saved by the "hero".  So they love their cops.

Unfortunately, a lot of cops are racists. No, they really are.  Do you know who knows that?  Suburban white women.  They hear them talk all the time.  They know they're racists.

White suburban women could play a big role in bringing down white supremacy if they could just get past their "save me" fantasies.   This can be done, it just takes some individual work.  But they don't want to do it.   Nothing much has changed about white women since they held the power to have a black youth lynched by claiming he looked at her.

The Police are out of control.  It's the cops who are rioting all across America, and they are upholding white supremacy and yeah bitches, the patriarchy, like I'm really sorry to have to mention that to you dummies.

Once they are done choking black men to death, abusing and throwing black women, and engaging in elder abuse (Buffalo, NY), many of them go home and beat their wives.   Domestic abuse rates are also higher among police officers.  These are just facts people.  Sorry.

Now take a look at this performance art from yesterday: 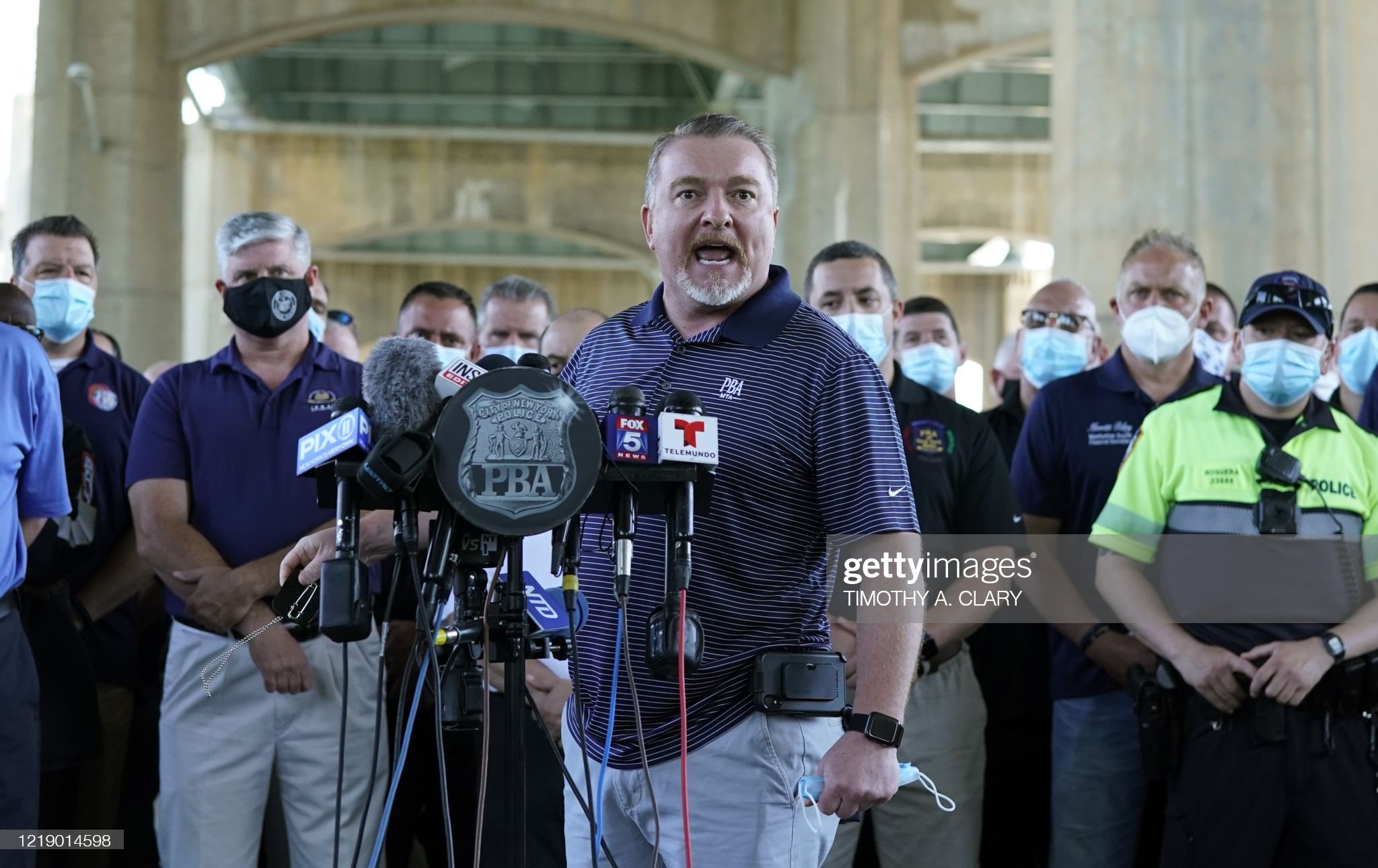 That's Mike O'Meara, the president of the NY PBA throwing a rage fit and pulling some Trumpy-type projection by claiming that cops are treated like thugs and animals.  Actually, cops treat black people like thugs and animals, and O'Meara knows this, he's just fucking with you and pulling a stained page out of Trump's book.   Accuse others of that which you are guilty.

And oh btw, check out the arms on all those guys, huh?  I used to work out at Gold Gym.  It's a long story and involves my then-fiance.  Who was NOT a cop.  Anyway, I always noticed that the loudest performative grunters were cops.  They also looked to me as if they were on steroids.  I used to call them roid-ragers and thought a lot about what it would be like for some poor bastard under their power.

They're not working out like this so they can benevolently protect you, princess.  This isn't Captain America; The First Avenger.

I used to think white women might wake up.  Honestly, even when I first wrote the above, I thought they might wake up.  But I am adding this postscript the day after white women elected a MAGA to be Governor of VA, and stunningly, New Jersey is this morning in terrible danger as we may lose the governorship there too.

To me, this puts New York in play and I won't live in a red state, so I would have to move across the Sound to Connecticut.  A lot of the Twitterati, which is what I call the assholes who somehow gamed social media early on and gained huge followings but are the same idiots you see in your local 7-11, are down on Kathy Hochul and want Tish James, and to them I say - SHUT THE FUCK UP.  Keep your out-of-state personal agendas in your bathrooms where they will do the most good.

I will vote in the primary for the person who has the best shot at holding the line in New York, because New York cannot and must not fall.   Falling is for shit states like Virginia, and though it would break my heart if Jersey falls this week, Jersey ain't New York, and New York must not fall.

We will hold the line and any of you out of state big mouths stay the fuck out of our business, because you ain't done too well thus far.

I'm not looking to make history, and just by the way, we already did make history when Kathy Hochul became the first woman governor of New York State.

My motto is better dead than red, and that's all, and I mean, all, I care about right now.  So stick to your own backyards and zip it.