If you're white you probably have relatives that look a whole lot like the enraged man in the header picture.  And like this: 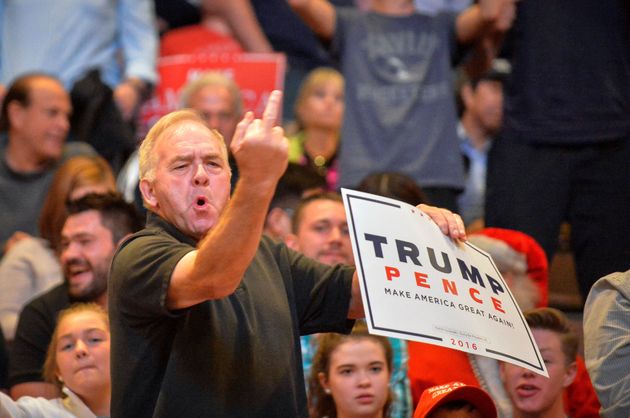 MAGA nation has become unhinged, gone off the rails.  And listen, they were never exactly sane.  So when you're white and these loons are in your IMMEDIATE family (I obviously cut off cousins, uncles, aunts, etc), how do you control yourself?

Listen I'm as confounded as anyone.  I know full well, 100%, if I get Covid and die, both my brothers would be on FOX shaking their heads "well it's a shame".  They'll want to get in that "it's a shame" so they look like they're slightly bothered their sister is dead.  There's a "but" there though...

"but she ate too much cheescake."  "I always told her to exercise more".  "look at me I'm in great shape"

Oh they will throw my dead body under the bus so fast to fluff that mushroom dick, believe me.

I was in NYC this past Saturday, the day they finally called the election for President-Elect Joe Biden.  It just so happened I was driving to Jersey City from Alabama (actually, from Long Island, but same thing) and I had to go through lower Manhattan.  On the way back, my friend and I decided to park the car and join in some celebrating.  Oh the big city was lit that night my friends.

Lit up with love, with joy, with friends, and with dancing.   All safe, everyone I saw was wearing a mask.  We ended the night by dining outside in Tribeca.

At the same time, unbeknownst to me, a Staten Island man was plotting mass murder on the streets of NYC, to punish Biden voters.

Now, what would have happened if I had been mass murdered by this terrorist or another like him?  (and still may be btw!).

My family would have shrugged and said I shouldn't have been there with "Antifa".   AND, if God forbid a big trump rally conflicted with my funeral, like the one they have planned this Saturday,  they would have sent their regrets.

Maybe they would have sent flowers.  Maybe.  That woulda been a tough call because what kind of flowers do you get for a "demonrat"?  Demonrat is what they call their fellow Americans who vote for someone they don't like.

Honestly, this dehumanization of liberals and now just your run-of-the-mill Democrats, wasn't started by Trump.  I can remember Glenn Beck clearly engaging in eliminationist language on his stupid fucking chalkboard, and that was back during the aughts.

You can go back to the 90's during the Clinton years and listen to right wing hate radio for its modern-day beginning I suppose.  And that culminated in Timothy McVeigh and Oklahoma City.

But it got worse with FOX going increasingly terrorist-adjacent.  And then along came Trump the life-long confidence man, and boy did he smell an opening.  Which he then filled with orange diarrrhea.

The dehumanization of the medical profession has been a step I didn't see coming.  America has a long history of eschewing expertise and education, but for a long time they did trust their family doctor.  Judging by recent conversations I've had, even that has changed now.  This development doesn't bode well for their own life expectancy but they're too stupid and ignorant to know that.

I'm keeping my ass home this Thanksgiving and Christmas.  I will drop off expensive gifts to the older ones and then head right home to watch Christmas movies and eat a pie I bake myself. I will see my little niece and nephew Christmas morning (the only true joys left in my family), but no removing my mask for eating or drinking. Don't feel sorry for me, I have it so good.  I have the best Christmas memories in the world and frankly, no Christmas has ever come anywhere close to those of my childhood.

I will spend Christmas evening, toasty warm, lightly buzzed, in front of a fire place, with dreams of next Christmas which I plan to spend in the Caribbean dancing through my head.  And for that I want to live.  Next year.  I want to live. And I don't frankly give a fuck who likes it.  IF  they get me, and they may, they are going to have to hunt me down.  I am not presenting myself on their doorsteps, head tilted, throat exposed, like one of their moron friends.

That's just the kind of stubborn DemonRat I am, what can I say.