I hate myself for still being on Facebook.  I used to think I was on there for cute pictures of my amazingly gorgeous little niece and nephew, but now that they are out of their daycare facility, I don't even see any pictures of them on there anymore.

I do have a few old buds and networking pals I keep in touch with via Facebook messenger, but couldn't I just message them "hey, I'm outta here, here's my cell text me!"?

I don't know.  Maybe it's easier being there than not.  I don't have the energy for all the questions that would invariably follow my deletion.

"What happened? Did you have a big fight with somebody that I missed?" (Personality type: FOMO)

"Was it something I said?"  (Personality type: It's always about me)

"Is somebody STALKING you?  Because that happened to me FOUR times and here are all of the details." (Personality type: Mr. DeMille, I'm ready for my closeup!)

So I just stay on there.  Lulled into inaction by my laziness and FOD (fear of drama).

This past week one of my cousins friend requested me.  Uh-oh.  Of course I'm FB friends with several of my cousins, but I have a few I actively try to avoid.  At least two of them are so f'ing crazy that if I posted their names you could google and find Podcasts they do that sounds as if they broadcast from another planet in tinfoil hats.

Then I have my melodramatic cousin.  It's at least a decade since she unfriended me on FB the first time.   In fact, I think W was still in office, so more than a decade.

And she unfriended me over a post I made about Jamie Dimon.  Something along the lines of "if this keeps up we'll all have jobs cleaning Jamie Dimon's many toilets."

I mean, WTF?  Like she's best friends with Jamie Dimon or something.  This is the shit I have to put up with in my unstable family, and this is only a minor annoyance, believe me.  This is NOTHING compared to the usual shit they pull.

The next day this cousin one-upped herself by unfriending my other cousin who is an environmentalist.   And because she's one of those types, she likes whales.  And so she posted a picture of a whale.

The picture of the whale looked something like this: 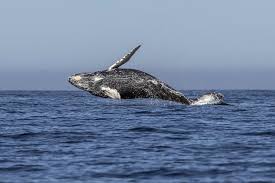 It was a nice picture of a whale off of Montauk, NY.  Where we live.  It's not like it was a dead whale.  I could see that.  I find that gross and Newsday will take any chance it gets to publish pictures of dead whales for some reason.     But that's not what my cousin did.  It seemed nice enough to me, and I don't have a big hard-on for whales.   I'm sure it made her feel happy.

And apparently ENRAGED our other cousin.

Is this what went on in her mind?  I dunno.  I'm not the Trumpster-whisperer.

Oh yes, the unfriender did vote for Trump.  Of course.

Well, the first time.  I really don't know what she did this year, but I haven't seen too many of them changing their minds contrary to what the media was claiming, right?  I mean, Trump DID get millions MORE votes than he got in 2016, and that's just a fact.  So  a lot of people watched us descend into the Walking Dead and thought "hey this is good shit, four more years!"

She's probably one of them.  She's very white dick-adjacent.  One thing I always said about her, and I mean this very sincerely: She excels at jumping on the right dick.  This girl took very mediocre looks, and mediocre is being nice, and parlayed them into not one but two very high-earning husbands.   I mean, that's a talent.  I tip my hat to her and always have.  She's probably good in bed, but honestly, so am I, and I'm much better looking.  I managed to parlay that into exactly jack shit, so...credit where it's due.

Anyway, so she friend requests me this week, like what, 12 years after The Whale Incident?  So now what am I supposed to do?  I have to accept this request because she's my cousin and it will start DRAMA if I don't accept. And I really hate family drama.  The way only someone traumatized by a very dysfunctional family can hate it.  I dread it.  If you have a trauma-filled family history I don't need to explain.

Now, I know she's going to unfriend me again.  I don't post much anymore, mostly songs or pictures.  So she'll have to wait a while for something as egregious as a whale picture or shade on Jamie fucking Dimon, but it'll come.

I find so much of this shit so hilarious.  I simply MUST create a character who becomes enraged over a family member posting a picture of a happy whale.  And I'm doing a lot of writing, so this WILL be used.  I should thank her for reminding me about it.  In fact, I think I will name a chapter "The Happy Whale Incident"