Few trailers have excited me the way the trailer for Promising Young Woman did.  It premiered at Sundance in January 2020.   I knew I would see it as soon as it opened, in April.

But I never forgot about the film.  And today, I was finally able to view it on Amazon for $19.99.   I would have spent at least that much going to the movie theatre, so I consider it a bargain.

I've actually had an idea for a book I've wanted to write about a woman who serial kills men who say stupid shit about politics.  Yeah, I know she'd have to be like, super prolific.  Anyway, the trailer for Promising Young Woman excited me so much because it struck a chord already playing in my head.

I even have this fact in my Twitter bio and mention I'm doing research now.  Men are incapable of reading the bio without talking about it.  Many of them have called me a psycho bitch.   LOL

I've had to  listen to men's stupid political shit since 1992, the first election I was able to vote in.  I went door to door for the Dems that year.  Did you know they dubbed it "The Year Of The Woman" back then?

Yeah.  Well, I'm here to tell you it didn't turn out so well, in the end.  Not what we women had in mind at the time anyway.  I can tell you for fuck sure we didn't have this in  mind for the year of our Lord, 2020, had we been able to see into the future: The sight that Dr. Christine Blasey Ford had to look at while she testified in front of the United States Senator about how a Supreme Court nominee,  Brett Kavanaugh, had tried to rape her.
We thought we had projected a better future for women when we responded to this fuckery: 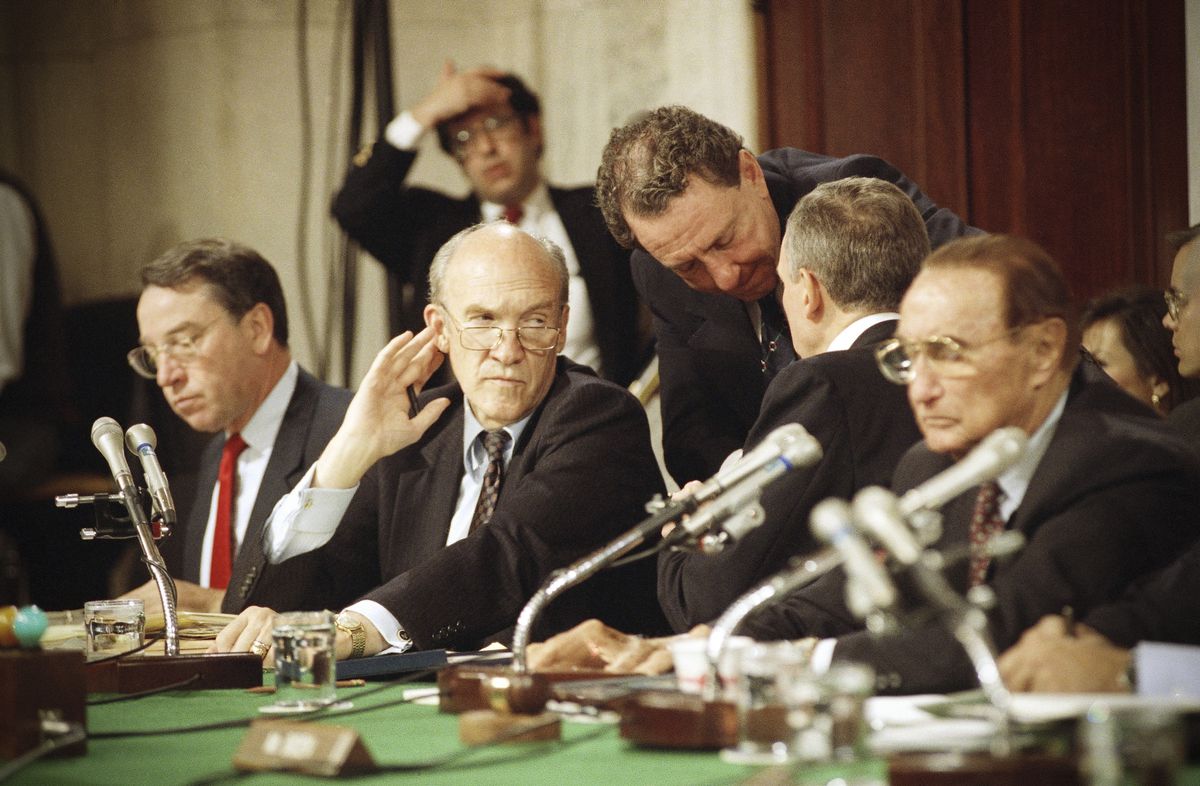 by electing more women.  So that there would never be another Anita Hill.  But not only did we fail to do that,  some of the same fucking clowns were sitting there.  I mean, the very same men.

I remember shortly after Bill Clinton took office, one of the men in my workplace complaining that Hillary had "fat ankles".   I remember that because, well, how could I not?  I guess it was the first time I heard anyone call someone's ankles fat.

Anyway, that guy?  He'll be the first victim in my book.  I don't know who the  last one is yet.  You know why?  Because I'm still alive so of course men are still saying STUPID FUCKING SHIT ABOUT POLITICS.

And of course, about women.

Anyway, back to Promising Young Woman.   When  I saw the trailer, I thought Carey Mulligan's character,  Cassandra, was a serial killer.  And you are kind of meant to suspect that for the first part of the film.  For instance, in the first scene we meet her first "victim".   The first predator.

He's played by Adam Brody and there's no one my age who can look at Brody and not see nice guy Seth Cohen from The O.C.   Which is exactly what his character is supposed to be.  A nice guy.

A nice guy who takes a very drunken woman back to his place so he can fuck her.  So he can rape her.

Of course, Cassandra isn't drunk and we see how that plays out up until the point Brody's character realizes she isn't drunk at all and that he's in some shit.

But we never see what kind of shit he's into.  The scene ends.  And right then, she could be  a serial killer.  She goes home and marks another one down in her little book of rapists, and then writes his name down.  It's a ritual.  Much like we see other serial killers performing in other films.

But before we are half way in we discover that in fact, Cassandra is not a serial killer.   She is terrifying these guys who tell each other she's a "psycho" (of course!), but no harm appears to come to them.

Cassandra is trying to work out the death of her friend, Nina, who we are lead to believe died by suicide after a brutal rape perpetuated by a classmate as others watched and laughed.

Eventually, Nina's mother asks Cassandra to let it go, to move on.  And Cassandra has recently met an old schoolmate, played by Bo Burnham, whom she likes.  So she decides to move on.

Ryan after all, is a nice guy.

It was during the pharmacy dance scene (a Paris Hilton song!)  when I first realized Ryan was one of the men present at the rape, and one of those who watched and laughed.

So the reveal that there's a video of the night and Ryan is on it, doesn't come as a surprise at all.  I'm not sure it's meant to.

It sure is the last word on nice guys though.  Isn't it?  Do more women fear their husbands, bf's, brothers, etc, would be one of the guys in the crowd, laughing, doing nothing to stop a rape, then fear they'd be the rapist?

So this is kind of a third rail the film hits right here.  Just how nice are the nice guys in our own lives?

So should you see this film?  Oh, absolutely.  It's five stars in the Chase book.  Maybe I wanted Cassandra to be a little darker, but she gets her revenge in the end.

There's another trope in the film that amazingly also played out in real life with Carey Mulligan.

One of the guys she's about to pull her act on, realizes she's sober when Ryan spots her out and she responds to his incredulous "Cassie?" stone cold straight.

And the guy recognizes her as the woman who went home with his friend Jerry (Adam Brody, and this is where we find out he survived his encounter with Cassie), and calls her a "psycho".   And then he tells her:

"You're not even that hot."

It never changes.  Reject a guy, and it's all I don't want her, you can have her, she's too fat for me.

Cassandra replies to him "you're not exactly a panty-dropper yourself".

In his review for Variety, critic Dennis Harvey had words to say:

"Whereas with this star, Cassie wears her pickup-bait gear like bad drag; even her long blonde hair seems a put-on. The flat American accent she delivers in her lower voice register likewise seems a bit meta, though it's not quite clear what the quote marks around this performance signify." Harvey wrote.

"It felt like it was basically saying that I wasn't hot enough to pull off this kind of ruse," said Mulligan, who noted that she can still recite some of the lines from the review.

"It drove me so crazy," she continued. "I was like, 'Really?' For this film, you're going to write something that is so transparent? Now? In 2020?' I just couldn't believe it."

Yeah, he was saying that.  Who is this motherfucker?  Some guy.  I would bet a lot of money that he's "no panty dropper" but this dude is so fucking hot his picture appears nowhere that I can find on any of his online Variety articles.

Why is a piece of shit misogynist who is basically stating that Carey Mulligan isn't hot enough to get raped (the fuck??), being assigned a film like Promising Young Woman? The Variety editorial staff?  I mean, I don't know, it's just a guess.

Disclaimer:  Carey Mulligan is gorgeous and I'm in love with her performance and with her.  But that is not the point, now is it?